Petha, for me has always been associated with a sweet, chunky, crystallized pumpkin candy. A good petha is soft on the inside, crusty on the outside. Agra, well known as the city of the Taj Mahal is also known for this candy typically called Agra ka Petha or Agre ka Petha in our Punjabi household. But it is so much more than that! I stumbled upon this recipe called Mai (pumpkin) Kan (stir fried) in the encyclopedic cookbook by Pushpesh Pant called India Cook Book.

Pushpesh Pant is a well known historian, academician and food critic. He is part of a tastefully produced show called Raja, Rasoi aur Anya Kahaniya where he traces the history of food with lots of culturally significant information. Did you know that Sambar, so common across southern Indian cuisines, might have begun as a dal based stew in the Maratha army? That was a revelation for me! Highly recommend this show, it is on Netflix.

The ash gourd is essentially another kind of kaddu or pumpkin. And, you know how much we love Kaddu. There is an Achari Kaddu recipe on the blog, and one for Khatta Meetha Kaddu, both of which can be made with a variety of pumpkins. While looking for savory recipes for the white gourd I found a variety of southern recipes, from Tamil Nadu and Kerala and then this one from Mizoram.

Interestingly, only a few sources on the web refer to Mai Kan, one of which (another blog) found it in the same cookbook! Since this was new to me, I went on another kind of search – on Instagram. And hey presto, I found Mizoram Food’s profile. They were responded quickly, confirming that Mai Kan is indeed a recipe from Mizoram. That is how I learned that Mai refers to the gourd and Kan to the method of cooking – frying. It is a shame we don’t know more about cuisines from north eastern India. This is one window into what will hopefully be more such recipes!

Thinking of the various ways we cook Kaddu I would be remiss not to mention desserts. In addition to sabzi, kaddu is also used to make kheer. While researching recipes for using the petha I bought at our local Indian store, I came across a few that used grated ash gourd in kheer. And, so I made kheer!

It was really easy to make and just as delicious as kheer with rice.

There are two ways to go about it. One includes boiling grated pumpkin in water until soft and cooked. This is then drained until needed later. Simultaneously, boiling milk to reduce and thicken it. I prefer doing this because I like kheer that thickens as it cools. If you prefer a more payasam like consistency then just bring milk to a boil and flavor it with saffron and cardamom. Then mix in sugar and blanched petha. That’s it. Another simmer and boil and kheer is ready.

So try it next time you crave something sweet and have a pumpkin around! Let’s get on with the Mai Kan.

I did exactly what Puspesh Pant recommends. First clean the petha, wash, peel, remove seeds and cube into 1 inch pieces. Heat oil in a heavy bottomed pan or wok. To this add onion and cook until starting to brown. Do this at medium high heat. We want them to fry rather than caramelize. Then add chillies, I fried them before adding rest of the ingredients. Stir and mix well. Keep the stove at medium to medium high heat through out. This is like a quick stir fry. Cook for 10 minutes or until the petha is done. I covered my pan at the end for a few minutes before serving to trap in some of the moisture. That’s it! Serve with rice and dal, or dal-sabzi-chapati and dahi.

The clean, juicy texture petha contrasts with the heat of red chillies. Be sure to bite into the chillies as you eat! I’ve been enjoying this recipe as a side with my bowl of rice and chicken and also with dal and chapati. It helps to also have some chilled kaddu kheer to end a meal! Try these simple recipes, a quick two in one with Petha. If you try Mai Kan with another kaddu, do share that too.

Some more recipe from the blog!

Bookmark this recipe or pin it! 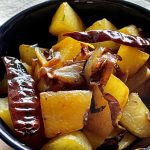