What does home remind you of, especially on occasions like festivals? Expat friends often talk about food. So, today we are sharing a warm, fuzzy recipe that embodies that nostalgia. It’s like a warm blanket that reassures you on a cold, rainy day. The aromas of cardamom and roasted gram flour can only mean good times are coming! Or someone’s cooking Besan Halwa.

Sakshi, Kanika’s dear friend & class fellow, photographer, cinematographer, editor, home-cook and a talented sketch artist (we might have missed a few more hats that she dons!), writes about her halwa passion/obsession. Enjoy!

I actually started writing this piece for Kitchenpostcards sometime in August 2014. That was the time I was also running around with preparations for my wedding, which happened in November.

In most Punjabi families, there is a ritual where newly wed brides prepare something sweet when they cook for the first time in their new home.

Well, I didn’t have to do anything like that because I was getting married into a Keralite family where this doesn’t happen. But, I was still pretty excited to cook a dessert for my new family. And the no compulsion clause didn’t stop me from ‘practising’ making the halwa at home several times, because, well, I just wanted to eat Halwa! 🙂

Whenever there is a special occasion in my family like a festival, a birthday or anniversary or a pleasant rainy day, my mom and dadi treat us to some delicious besan or sooji halwa. The besan variety is mostly made when someone has a cold. Besan is gram flour, made by grinding chickpeas and the warm, sweet, sometimes, soupy preparation soothes the throat during a flu. But anyway, besan or no besan, we’re suckers for Halwa!

Another occasion when we get to devour halwa is at the Asthami pooja during Navaratras. At the time of the Navaratras, you’re not restricted to halwa parshad (offering to god) made at home by your mother. In our neighbourhood, every kitchen would be in the thick of activity preparing both, halwa with poori and channa and force feeding you! Yeah, that is what happens when you are a little girl growing up in North India. This comes from a ritual where young girls are honoured, literally as goddesses, served food and given gifts by the host. Here is a short description of how the festival came into being, don’t hold me to it!

But even then I would, and still do, prefer the halwa made at home by my mom or grandma.

I would often hang around in the kitchen, propped up on the kitchen counter and watch my mother making halwa in a big kadhai. And thanks to those endless sessions of witnessing my mom and dadi making halwa, I can proudly say that I have managed to learn the technique to making the perfect Punjabi style halwa!

The trick, I learnt was that the besan and sooji mix had to be cooked properly for that brilliant roasted flavour.

Now that I’ve moved to the UAE, I’ve discovered that ‘halwa’ is also a popular sweet in Arab countries. In fact, Halva or Halwa or aluwa or Helva or chalwah or halewah (okay, I’ll stop!) actually comes from Arabic. But I haven’t, yet, tried any of the local varieties. Until then, here’s the recipe for Besan halwa:

Melt the ghee in a kadhai (wok). Add besan and sooji and stir. Keep stirring and cook till its slightly golden. Use both, besan and sooji. The sooji has a grainy texture that adds body to the halwa and sooji absorbs moisture better than gram flour, helping in the cooking process.

Meanwhile, take a bowl and add water, cardamom, washed raisins and sugar. Keep this mix aside while you work  on the besan sooji mix.

Now, add the almonds in the kadhai and continue cooking till the colour of the mix turns to a beautiful golden colour. Remember to keep the heat between medium and low or else the mix will become too brown too quickly and will taste of burnt gram flour.

While stirring the mix in the kadhai continuously, add the water mix in a steady stream. Put the heat on medium and let the mix come to a rolling boil. You will see white froth or bubbles on the boil in a while which basically shows that the sugar is now cooked.

Stir and check the consistency of the halwa. Keep it on the stove for longer if you like the halwa to be thick. I usually keep the consistency a little loose, especially if it is made for treating colds. It anyway becomes thicker once it cools down as the flours absorb the moisture.

There you have it!

Now serve this luscious Besan Halwa in small plates or bowls and enjoy! 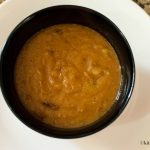