Join us for a conversation about all things food that spans the continents, literally!

Postcards were such lovely little snippets, a view of a far away town, city or country – a little something to send back home.

Recipe cards tell similar stories – from when a recipe was written down to how it’s changed in the years since. So, while we don’t send as many physical postcards to each other or write recipe on cards (thanks technology!), we thought why not name our blog after these fading forms of communication, and here we are!

Kitchenpostcards is a food and lifestyle blog that begun as a medium to start a conversation over food as well as to catalogue the founders’ -Akkta Panwar and Kanika Samra’s – food journeys and adventures. Then came along others who have joined the dialogue and generously shared their recipes on the blog.

Kanika and Sakshi are friends who met at film school in 2007 and were soon christened twins by classmates and friends. Now living thousands of miles apart in different continents, these twins have re-discovered their common love for food and joined forces to pour their love and passion for cooking on to the pages of Kitchenpostcards.

Here you will find easy to cook recipes with tips for the college-goer, young professional and some for seasoned home cooks as well.

In its current avatar Kitchenpostcards is a platform for collaborative food writing chronicling the life of urban cooks, whatever their vocation. The new urban landscape whether in India, America or UAE – places where Kitchenpostcards editors hail from and currently live – puts us in the crossways of industrialized food production along with ever-increasing awareness of health issues, indigenous food habits and the constant need to be at the forefront of experimentation and discovering new cuisines. A tall order by any standards!

While we do ponder over these things within our team, we are, mostly, about easy to put together home cooked meals.

A Little About The Editors 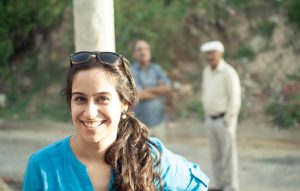 Sakshi is a filmmaker, photographer and academic who firmly believes that cooking is a life skill that everyone should learn, regardless of their gender. Her love for food was cultivated by her foodie family and was nurtured over the years as she sat on kitchen countertops and watched her parents and grandparents cook delectable recipes that she still swears by. As a result, cooking and of course, eating has been the “pick-me-up” for ages in her family. The first actual recipe she learnt was an omelette/ bhurji from her father. Her father would teach her and her brother almost every Sunday because they wanted to play around with the new food processor that they had bought in the early 90’s. And that is where it all began. Her family had been her guinea pigs on whom she would experiment her concoctions until she got married to an unsuspecting Malayalee man who says he suffers to this very day.

After a move to Dubai, where she finally set up a kitchen of her own, she finally started writing, after a very persistent and encouraging twin/soul sister asked her to contribute to her food blog Kitchenpostcards. The rest as they say is history! 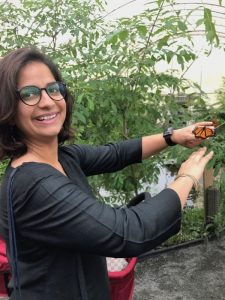 Kanika is a marketer and strategic communications professional in her day job, who can be often found day dreaming about her next meal, making mental maps of things inside her fridge and pantry. Now you know why we clubbed eccentric and pragmatic together! In addition to cooking, she also shares a love for films, photography and writing with Sakshi. And much like her co-editor, Kanika’s love for food blossomed at home. Her mother, grandmothers and father, all played a pivotal role in shaping her palette and openness towards trying new flavours and cuisines. As an army kid, she spent her childhood in the desert state of Rajasthan, India – neighbouring but far away from her native Punjab. Over the years, local foods became family staples, expanding both, her mother’s repertoire and everyone’s appreciation of new flavours and textures.

Fast forward to now and as an expat living in the U.S. the same is true for Kanika. Her culinary repertoire – from Indian to Italian to Mexican to Mediterranean – is ever expanding. She is happy to have found in her equally food crazed husband an eager and usually, satisfied guinea pig.

Get Cooking with Us!

That’s enough about us. We hope our enthusiasm and considered writings will help you get started in your kitchens. Keep reading for inspiration and stories that will make you hungry and, we hope, help you cook to satisfy those cravings.

At Kitchenpostcards, we love food and better still love to be inspired by stories about food.

If you have some stories of your own or secrets to share, don’t hesitate, we are all ears!

Drop us a line at: [email protected]

Subscribe for Free! Recipes, inspiration and tips you can use. We will be mindful of your inbox!