Tindora or Kundru is a common gourd, readily available almost throughout the year except the winter months in northern India. Called Ivy Gourd, this tiny vegetable is a tropical vine that is most common in southern and eastern Indian food. Not as common in the north, Kunrdu is nonetheless easy to cook and adaptable to various styles of cooking. It has several different names, as you can likely tell by the heading of this recipe. This Besan Tindora sabji takes a leaf out of another recipe, the Kurkuri Bhindi which is itself inspired by Rajasthani cooking.

I mentioned that North Indians don’t use this vegetable a lot. My parents cooked kundru rarely, while it might have been more common in my dadiji’s kitchen in Bhopal. Tindora sabji became a regular dish once we were introduced to Odiya food and later, when my parents moved to Hyderabad. It soon became apparent that it was easy to cook and refreshing in the hot dry climate of Andhra Pradesh. Ever since then it has been one of my favorites! I try to buy kundru as and when I can, though that isn’t too often in the US. If you live abroad, try your local Indian store or a specialty store. Some East Asian markets carry produce like this to cater to the diaspora.

I make this recipe in the the air fryer using an Instant Pot Air Fryer lid for my 6-quart instant pot. While the air fryer is a time saver, it is not as many claim a sure shot way to make food oil free. Think of an air fryer as a mini oven with a fan. By circulating hot air fast and consistently within its small confines, it achieves the result of cooking food faster than other processes. That’s it! You will need some oil. Definitely convenient. But there are some things to be careful about. I watched this great video by CNA Insider about using an air fryer. They raised the issue of acrylamide formation. Acrylamide, what? Yes, my reaction precisely. Keep reading for tips that I’ve adopted after learning about this chemical.

Okay, enough of this, on to the Besan Tindora sabji recipe.

You will need an air fryer or a large frying pan.

To begin, wash the tindora and then dab them dry with a kitchen towel. Proceed to chop into discs that are about half an inch thick or less and as uniform as possible.

In a separate bowl measure besan, salt, turmeric, chilli powder, coriander and black pepper. Mix well. Next, mix this into the chopped kundru. Do it in the same bowl, if large enough, or use a third larger vessel to coat all the chopped kundru with spiced besan.

Preheat the air fryer to 350 F. Some air fryers come with a preheat option. Mine does not. So I set the temperature and turn it on for 2-3 minutes. That’s it. Air fryers reach the desired temperature very quickly.

When the air fryer is ready, tip in the kundru. I was able to cook all in one batch. If the basket is small, do it in two batches. Close air fryer and set it for 10 minutes, at 350 F. Check at the end of this time, toss the kundru to turn them. They should be shriveled by now and starting to brown. Cook for another 5-10 minutes at 350 F to get a crisp texture.

That’s it! Besan Tindora is ready to eat. I love the tiny bits of besan that drop to the bottom of the instant pot. They crisp up really well and add extra crunch. Use these as garnish.

I served besanwale kundru with rice, dal tarka, a fresh green chilli topped off with that crunchy besan. These are delicious served with parathas or as part of an ensemble indian meal of dal, sabzi, dahi and salad. Make it!

Some cooking inspiration from the blog 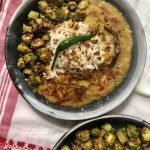 Read the post to learn about cooking food safely in an Air Fryer to reduce chances of producing acrylamide.