Saag is a well known part of north Indian cuisine, specifically Punjabi food. In the winter months restaurants never fail to mention that there is saag and makki (corn) ki roti on the menu and if you go in to one serving north Indian fare you will be enthusiastically encouraged to order the duo. I would bite the bait! There is nothing better than having this carb loaded meal with butter and adrak wali chai on a winter afternoon. If dining al fresco, which is possible in the Indian winter, even better.

Punjab is a north western province in India that borders Pakistan. After the partition of erstwhile British India it became a focal point for creating food sufficiency in newly independent India. As a result the green revolution of the 1960s, that pushed industrial agricultural practices, converted this small state into the bread basket of India.

Hindi cinema played a crucial role in propagating this image and many others of a new, strident country. (Geeking here as a former student of cinema) Film makers supported the government’s vision of a strong, self dependent nation and produced films that were about nation building. But as the decades wore on skepticism set in (cinema of the 80s and early 90s) and closer to the new millenium people sought refuge in escapist story telling.

Enter the hero, Rahul, just arrived from England and awaiting to embrace his heroine, Simran, who as all Indian women should senses his presence and arrives in a field abloom with mustard flowers. This scene from Dilwale Dulhaniya Le Jayenge (DDLJ) became a defining image of onscreen romance in the 90s. For Punjab it meant the state would forever be shown as a land with acres upon acres of blooming mustard.

The one good thing that has come out of this romanticised vision of mustard fields and life in the ancestral village is the showcasing of saag and makki ki roti.

Some of my fondest memories of travelling to my grandparents home during the winters is of tasting fresh, hot jaggery cooked by farmers using juice from freshly cut sugarcane along the side of the Grand Trunk road. The second memory is of eating sarson ka saag made by my maternal grandmother and watching her working fine cornmeal (makki atta) into a dough and cooking makki ki roti. If you ever saw someone make makki ki roti, you’ll know it’s an art!

Both sarson ka saag and makki ki roti are simple peasant foods that are in fact difficult to get right. Saag in various regions within India refers to a simple dish of either sauteed or boiled and tempered greens. The combination of greens vary from state to state. In Punjab the dominant combination of ingredients used for making sarson ka saag are sarson (mustard leaves), methi (fenugreek leaves) and palak (spinach). Whereas in the northern states of Kashmir and Himachal Pradesh other greens are used like haak (collard greens) and bathua (lamb’s quarters/goosefoot).

When I landed in the United States smack in the middle of winter, I had to get my saag fix. Admittedly, it took me a while to figure out my grocery routine and set up a kitchen. But as soon as I did, I went looking for mustard leaves. When I couldn’t find them or spotted old wilty ones at the local Indian grocery store, I laid my sights on collard greens. Little did I know then that I was actually choosing an ingredient very close to home, my grandparents lived for decades in Himachal Pradesh and ate all varieties of saag, even if it was new to me.

Kashmiri Haak and bhurji with greens!

Recently, I learned from Anita, of A Mad Tea Party’s instagram stories and posts about the Kashmiri Monjji Haak. As Anita describes it, the Kashmiri recipe for haak with kohlrabi greens is closer to sauteed greens such as spinach with garlic with the addition of steaming or simmering in water. From stories shared by family members I’ve discerned that this technique was also common among city bred folks in Punjab especially those who had moved from western provinces; part of Pakistan post partition. They use the term “bhurji” for identifying sauteed greens such as mustard, perhaps because they’ve just been roughly chopped and sauteed, a muddled preparation that could vary each time. Bhurji as a word is often used to imply a muddled affair, or something presented in a haphazard fashion. Himachali cuisine also shares this method.

Food for the farmer – Saag and Makki ki Roti

The peasant’s sarson ka saag is another thing altogether. It is thickened with the addition of flour – either fine cornmeal, whole wheat or chickpea flour – and the greens are stirred continuously (think the motion of churning butter) until they become one lumpy blob. As sad as that sounds, it is delicious! There is, in fact, a specific utensil called a “madhani” in Punjab for churning foods – milk for butter and steamed sarson for saag. The ‘madhani” has been immortalised in a well known folk song, sung here by Mussarat Nazir (a new version by Neha Bhasin), recalling small pleasures of a bride’s home. This kind of saag has two really important qualities – first, is the increased volume due to flour that can feed more mouths and second, the use of readily available ingredients such as mustard and cornmeal.

My version of Haak ka Saag is inspired by all the delicious sarson ka saag made by my grandmother and mother over the years. I learnt a lot by just observing them and learning to recognize flavours each time they experimented with a recipe. So here goes, hope you enjoy this simple dish as much as I do.

For steaming and cooking the greens:

Before we start cooking the greens, step one is to wash them thoroughly. Put them in a water bath in a deep pot. Rinse well and remove the leaves to a strainer. Throw away the water you just used. Rinse the pot to remove any loose dirt. Then put the leaves back in a water bath with fresh clean water. Strain. Repeat this at least thrice before straining them one final time to drain excess water. Alternatively, you could buy frozen chopped greens that are prewashed and ready to use.

After washing comes the chopping. For both sarson and haak the most important part is to remove the central stem (see the images above). I do this to reduce the bitterness; but if you have a palette for it then keep them.

Next, roughly chop the collard greens. I used baby spinach that doesn’t need to be chopped. If you are using larger spinach leaves, chop them too.

If you are using methi, fresh fenugreek, the same rules apply. Wash it thoroughly then remove leaves from stems. Methi stems are particularly bitter, especially if the plant has ripened.

Smash garlic cloves and peel them, roughly dice half an onion and slit open green chillies, if using, and de-seed them removing the inner white pith. Wash, peel and finely chop one inch piece of ginger. Keep it aside for the tadka.

Put the leaves, garlic and onion in a pressure cooker. Season with salt, red chilli powder and turmeric. Add half a cup of water and close the lid. Steam on high for the first 10 minutes. If your cooker has a whistle, then until the first whistle. Lower the heat to low and let them cook for another 15 minutes. If you are doubtful about the water evaporating and burning the leaves, then turn off the heat and allow steam to escape without opening the lid. Once the steam has escaped, open the lid carefully and check. The aim is to find leaves that have cooked, wilted and turned a dark green colour. Onions would have melted and garlic cloves should be soft and mushy (see below).

After steaming its time to thicken them and start the process of stirring to make saag. Add a tablespoon of flour. I used whole wheat flour but you can choose from amongst whole wheat, corn and chickpea. Fine cornmeal (not corn flour) is the default choice in Punjab.

Add the flour and start stirring immediately. Since I don’t have a madhani, I used a slotted spoon. You could use any large spoon, preferably a sturdy one, that is comfortable for you to move. Keep stirring to mix in all the flour and then continue until the leaves disintegrate and come together as a mash (see below). This should take approximately 10 minutes; longer for a larger quantity.

Transfering to a food processor is an option. But most processors will completely obliterate the structure of leaves and give you a finer puree, almost like a chutney. That’s not what makes a saag – it is instead defined by its thick body. Try to achieve this.

Time to prepare the tadka.

Heat ghee or butter in a small pan. I used unsalted butter.

Another option is to use mustard oil. It has a very peculiar pungent fragrance. I love it! But a lot of people do not. So decide which works for you. You could also replace butter and ghee with any other cooking oil.

To the warm butter/ghee/oil add cumin and rai (black mustard) seeds. Let them splutter, then add ginger. Once it is fragrant add a pinch of red chilli powder and coriander powder. If you are out of coriander powder but have coriander seeds, use them or alternatively either pound or grind a handful of seeds. Pour tadka over the saag and mix in.

Transfer the saag to a serving bowl and garnish with some more butter or ghee. Don’t take any halfway measures here!

I served haak ka saag with roasted potatoes, plain yogurt and almost tandoori rotis that were made in the oven. We polished off the saag within minutes.

I would love to hear how your experiment with saag turned out. Be sure to leave a comment below. 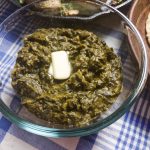