Imagine you are on a road trip in the heart of North India. Wide expanses of green on either side of the road, sometimes peppered with fruit trees of mangoes, guavas and an occasional flush of golden gehoon (wheat) or swaying sarson (mustard, depending on the season) fields pass by.  You stop over at a rusty dhaba for a quick bite and a cup of tea. And guess what, even though the floor is muddy and the chairs are made of cheap plastic, the food is delicious!

Having grown up in Delhi, my parents took me to countless road trips during summer vacations to nearby hill-stations in Himachal Pradesh and what is now known as Uttaranchal. Of course, during those trips we made pit stops at dhabas where we satiated our hunger with food that was homey and satisfying. With sides like ‘green salaad’, mix-vegetable achaar (pickled vegetables) and sometimes just onions and green chilli; we would devour the simple preparations presented to us. After all we would start from home in the wee hours of the morning to reach our destinations as early as possible and needless to say we were, usually, starving.

Last month on a short visit to India, I made two road trips and experienced the sights, sounds and tastes of the highway dhaba. The first trip was to outskirts of Punjab and another was a day trip to the Taj Mahal in Agra. The former still has rustic dhabas that I’m going to talk about. But slowly, they too are going for swanky makeovers like the iconic ‘Sukhdev Ka Dhaba’, in Murthal, Sonepat that is famous for its stuffed parathas or flatbreads. It even has it’s own website now. The ones on the Yamuna expressway are franchises of popular fast food joints from urban cities.

The charm of NH-1 Dhabas

The real charm of the dhaba lies in the ones that still serve dishes based on what is available locally. In our grad school days, Kanika and I had a professor who would talk incessantly about food and zen stories while teaching us about visual communication. One of his pro tips was that when you go to a dhaba on the highway, instead of asking for the menu, ask the dhaba guy what is grown in the fields besides the dhaba and order something based on those ingredients and you could never go wrong. The freshness of the ingredients is an important factor in the taste of any dish and Dhaba recipes are known for their simplicity and wholesome goodness.

Good simple food and relaxing on the those charpoys laid in fresh open air; that is what Dhabas are all about. But traditionally, dhabas have catered to truck drivers and anyone else travelling long distance. These spaces are mostly owned and managed by men and regarded unsafe for women travelling alone. Last year, a bunch of girls in Pakistan started an online campaign called Girls at Dhabas to reclaim the male dominated space of dhabas. They encouraged women to take selfies at dhabas and post them to social media with the aim of defying cultural norms that don’t allow women to move around freely in the public spaces in the name of safety. Well, I certainly have a good dhaba story- with the family though. Next time, there will be a selfie!

My mom and grandma have always served us one dal (lentil soup) that they both call “Dhabe wali daal”.

Their recipe uses a combination of chana dal and split black gram. Dhabas use chana dal a lot because it is one of the cheapest ones in the market. For the uninitiated, chana dal is from the chickpea family, often called split bengal gram. Kanika wrote an extensive article on where the world gets its lentils from and it makes me wonder if the humble rustic dal that are dhabas are so famous for comes from the Canadian Praries.

Once I got back from my holiday, I still longed for the awesome food we had savoured at a roadside dhabas. I did something to fix that craving and decided to make a dhaba inspired meal in my Dubai home.

And yes, I made dhaba style dal and crispy jeera aloo to go with rice and roti. The recipe is super simple and healthy and can be prepared even by the culinarily challenged.

Start by measuring both the dals. Next, rinse the dals till the water runs clearer.

After a thorough wash, soak the two dals in 2 cups of water for half an hour. Transfer to a pressure cooker and add chopped tomatoes, onions, ginger, garlic and green chillies. Add some salt and turmeric powder and pressure cook for 2-3 whistles, approximately 25 minutes. You can open the cooker once the pressure releases. A trick to release the steam faster is to remove the weight on the lid- that’s what whistles.

To prepare the tempering, start with heating  the ghee in a small pan or kadhai. Once the ghee is warm, add heeng, chilly powder, coriander powder and garam masala.

Keep the heat on low to avoid overcooking and remove from heat once the spices mix. Pour over the dal.

Cut potatoes in halves or two inch pieces. Heat oil in a pan and add cumin seeds. Next, add the potatoes and cook on medium to high heat till they form an nice golden crust. This should take 10-15 minutes. Add salt and other spices. Cook for 2-3 minutes.

Serve Dhabe wali Dal and Jeera Aloo with roti or rice. And voila! The dhaba is in your home! 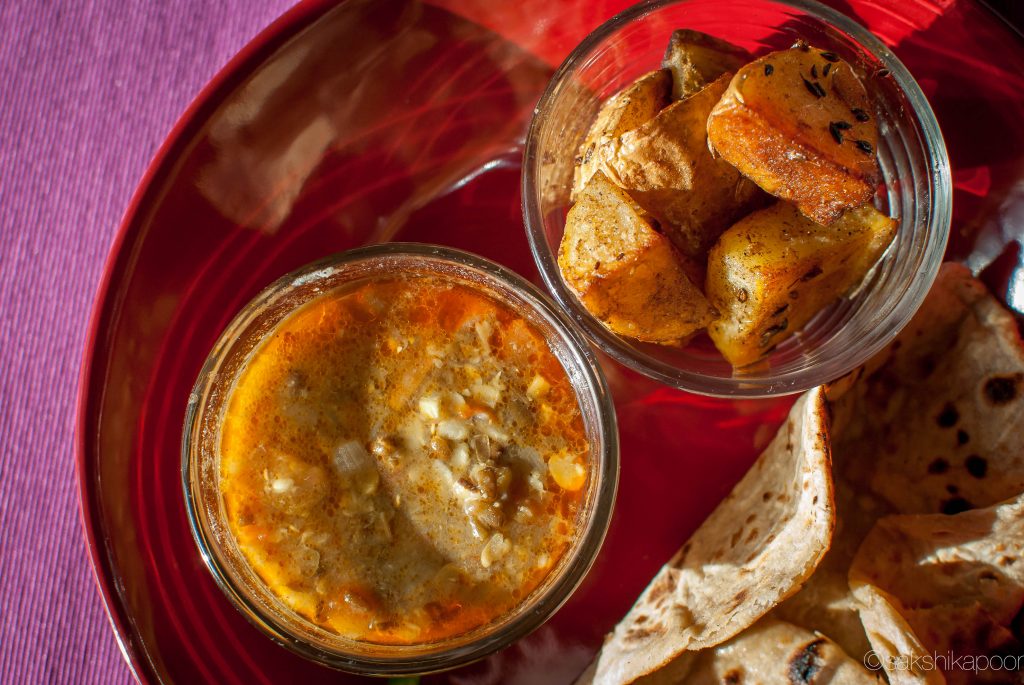