Makki di roti is one of those stereotypical foods that are seasonal and dusted off (pun intended) for a short period of time in honor of the season and cultural heritage. In Punjab or anywhere in northern India you will be presented saag with said roti repeatedly until the end of winter. It’s a carb rich meal that induces the best afternoon siestas I have known. Made better with a charpoy laid out under the open sky to absorb the most winter sunshine possible. Gather up some quilts. Chit chat with your fellow lunchers and drift into a cozy sleep. Bliss!

You’ll find numerous articles on news websites from India touting the health attributes of a meal of saag and makki ki roti. There is no denying that green leafy vegetables are generally high in certain nutrients such as antioxidants, various vitamins and iron. Whether our ancestors knew that, had perhaps observed the impact of winter greens on health and well being is something we won’t know for sure. But we do know that there is a seasonal calendar of fruits and vegetables across the world. Such is nature’s cycle that invariably seasonal produce bolsters immunity and compensates for the micro and macro nutrients we need. Sakshi and I talk about our favorite winter foods on the podcast. You can hear it here. Try to eat the calendar!

The quintessential image of Punjab’s mustard fields popularized by Raj and Simran’s love in DDLJ (you know if you know!) is seasonally accurate. Traveling along the Grand Trunk road in winters you will find yellow fields as far as the eye can see and trees shrouded in mist at dusk and dawn. Its the perfect agrarian setting. Those are mustard (sarson) fields. Grown as a catch crop between major planting seasons of Ragi and Kharif, it is harvested for seeds that produce oil and as a vegetable for saag. Punjab isn’t the only region that grows mustard and its varieties. Other regions grow it for seeds and oil. From Kashmir and Himachal Pradesh in the north to eastern states like Orissa and West Bengal to Andhra Pradesh and Karnataka in the south, all grow mustard.

Mustard is seasonal, but why Makki?

Makki or maize in this case is derived from corn. As a crop corn precedes the sowing of wheat. So by the time winters roll around there must’ve been large reserves of dried corn i.e maize to grind into meal or flour. This is my hypothesis for why this particular flatbread is so common in the winters. The wikipedia entry on makki ki roti mentions that maize arrived in the subcontinent with the Portuguese and was probably not as widely used as it is now until the 19th century. Food habits are ever evolving. Same as the use of tomato in our cooking. In rural Punjab while my grandparents were growing up and even now tomato based preparations are not as common as restaurants would have us believe. Kunal Vijayakar bemoans this overuse of tomatoes and if you were to flip through recipes in the India Cookbook by Pushpesh Pant, tomato will only appear once in a while. Anyway, back to our recipe!

It is best to serve and eat these rotis as soon as they are off the griddle. To make the dough measure flour in a large bowl. Warm up some water. It should be lukewarm so that it is comfortable enough to work with without scalding your hand. I had boiled water in my kettle earlier in the day and used it. For 1 cup of flour, start by adding 1/2 cup lukewarm water and starting mixing and kneading. Then add a tablespoon of water at a time until you get a cohesive, soft dough like above on the right. Using warm water fastens the process and produces a pliable dough. Though there are cold water corn flours too.

Working with makki atta is difficult because it lacks gluten which makes it crumbly. Gluten free doughs are hard to roll and flatten. I find moistening my palm and fingertips eases the process of shaping the dough. Another option would be to use oil on your palms and fingers. In order to make makki ki roti you have two options. Break a bit of dough about the size of a golf ball and then proceed one of the ways below:

Cook on the first side until you see some bubbling. Flip over and cook on the second side for a minute or two. At this point either cook like a chapati or a missi roti.

Cook evenly and enjoy warm, fresh off the griddle!

Sometimes, with luck, a makki di roti fluffs up just like a chapatti. But this is rare. Most often though makki roti stays thick and flat. Continue rolling and cooking until all the dough is used up. Storing makki dough for later is not a great idea. It is most pliable when fresh and warm.

I like to add a dab of ghee on both sides before serving them. Be sure to enjoy them fresh with hot saag, dahi, achar and salad. Sitting out in the winter sun (where possible) is a great seasonal bonus!

Feel like snacking in the winter sunshine? Try Gur-Chana. It is also favored by horses, really.

Explore more recipes on the blog!

Bookmark or Pin It! 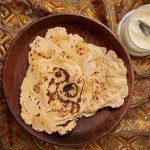 Tips for rolling the dough

– Makki or maize flour is gluten free. So if the first few attempts fail, try again.  – Make sure you have a clean ziploc bag. Wash it before and after use. Save it for the next time you decide to make Makki di Roti.